A downloadable game for Windows, macOS, and Linux

Honey Trap Version 2.2 is a submission to the visual novel jam, NaNoRenO 2019.  The build available for download is the beta demo of the game. An updated version  of the demo is currently in development. Please see the dev logs for more information.

Feedback would be highly appreciated and can be provided here via the Honey Trap testing form.

KIKYO Agency deals with all underground happenings and individuals. Naturally, there are some clients that want dirt on people they want snuffed out. There’s no easier way to slide in between a prey’s defenses more than playing with their carnal desires. Honey Trap Agents are devilish spiders ready to sink their fangs into the next target—but what happens when they pick on something bigger than they can chew?

Agent Kazuto founds out more than he bargained for when he takes on a mission that leads him down a path he might not make it out of.  With his past suddenly resurfacing and his current relationships at stake, there's only so much he can do before his luck runs out.

Depending on the player's choices, you can raise or drop the following:

Some choices will raise more points for one stat over another (i.e. one option may have +3 Affection and +1 Lust and vice versa for another choice). Certain scenes will only unlock if the player has accumulated enough points, so be sure to choose wisely or replay for more variety!

Please let us know your thoughts on the game!

Will this ever be finished or will we be given any information?

it seems like they will just be updating the demo a lot. It doesn't look like the full release is a for sure thing yet.

Hello! Further development on the full game is on hiatus, as is the demo update. When we do begin working on the project again we will definitely let everyone know!

should probably make a post on here about that lol

Oh wow these comments are old...gonna miss this game

Will game paid  or free?

Hello! The demo and any updated builds of the demo will be free. Any expanded releases after the demo would be paid content.

I can't wait for more updates for Honey Trap and The Glass Coffin.. Keep on work and good luck mate~

Hi! We're so glad to hear that you enjoyed both of our titles! Thank you for the wonderful feedback!

its really so hard for me to stop on that spot . I really liked it wait no I adore it .this game is my fav yaoi /game  . thanks .cant wait for the full story

Thank you so much for the feedback, we are so glad to hear you enjoyed it!

Just played the demo, it was great! Very interesting, I really like Lucas and Jay, and of course Kazuto too. The three of them are very charming <3

Thank you for your feedback on the demo! We are so glad to hear that you enjoyed the story and characters!

damn thats an uncool place to stop the demo ahhhhh!!

Thank you for playing and enjoying the game! Please look forward to the extended demo for more content.

is it still continuing ?

If so whens the full release ?

If theres a accurate date .

Yes, Honey Trap is still in development! The team is working hard on projects including this one, please look forward to a dev log in early/mid September!

The full release date is tentative, but we're striving for some time in late 2020.

Do you have an idea of the price of the full game, when it will be released?

Hello, thank you for playing the demo and showing interest in the game!

We estimate that the price will be about $15, but it is subject to change depending on the production costs.

The projected release date for the full game is in late 2020, but we are currently focusing on the updated demo in the meantime.

Hello, we're so glad to hear that you enjoyed it! The team is working hard on an updated version of the demo, so please stay tuned!

I just played it and answered the survey. I really like the characters and storyline for now, and I hope to see more updates from this game! Good luck on your project!

Hello, thank you very much for filling out the survey! We're really glad to hear that you enjoyed the game, please stay tuned for more updates!

I already completed the survey, but I can't stress this enough: find better background images, especially if you want to put this game on Kickstarter. Those pictures are very low quality and commonly used in cheap mobile games. Not a good look at all

since it was a free game i can understand this. i do agree though.

Hello, thank you for leaving your feedback.

Due to time restraints and the budget during NaNoRenO, I had to find specific backgrounds for free that matched the setting, but they were unfortunately low quality.  However, the latest build that I'm working on has updated backgrounds that are much higher quality. Please look forward to the dev log that will have detailed descriptions on the updated game build. 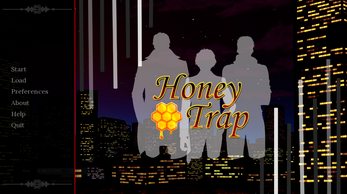 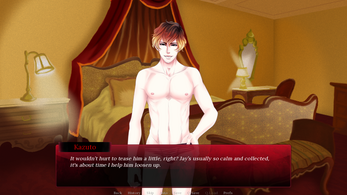 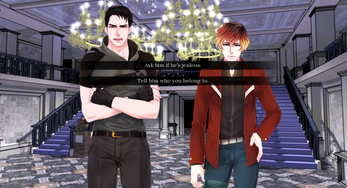 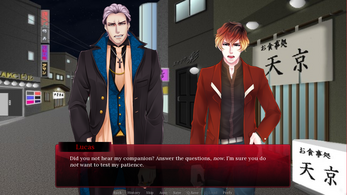